This activity is suitable for students aged 8 – 11.

The Age of Revolution was a time of exploration and discovery in the field of natural sciences. Captain Cook’s voyages brought new knowledge to Europe about the animals, plants and peoples in Australia, Hawaii and other lands in the Pacific. Charles Darwin’s studies aboard HMS Beagle led him to develop the theory of natural selection and evolution, which would transform the way the natural world was understood.

Scratch is a visual programming language aimed at children. Projects are made by assembling coding blocks into scripts, which then give instructions to characters, objects and backgrounds designed and chosen by their creators.

Try our simple step-by-step guide to using Scratch to help students explore adaptation and evolution and create their own versions of the Exquisite Specimen game.

Use objects from the Revolutionary Collection to help introduce students to some of the new knowledge and ideas about the natural world that was developed in the Age of Revolution, including Charles Darwin’s theory of Natural Selection:

Students could research how different animals are adapted to their environments. For example, the students from Newton Primary School discovered how the kangaroo is adapted to different habitats in Australia – their large feet and muscular back legs allow them to cover large distances, their long, thick tail helps them to balance and their large ears are well suited to listening for predators.

Students can try playing the Exquisite Specimen game on the Scratch website.

By selecting the See Inside button on the game’ project page they can look directly at the code and assets used to construct the game. 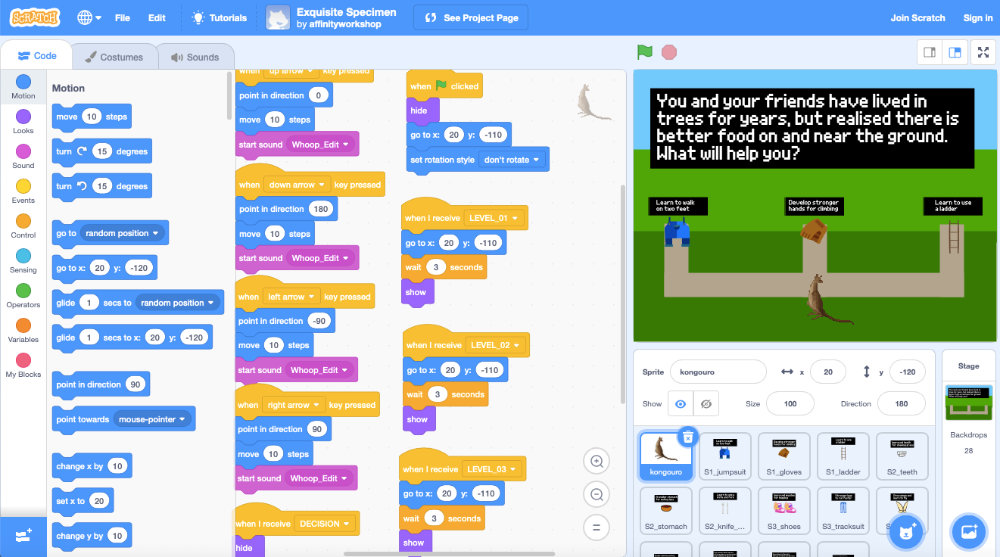 Students can then make their own version of the game by manipulating the code and other assets, such as artwork and audio effects to create their own personalised versions:

Start by creating an account on the Scratch website (if you would prefer to work entirely offline, please read section iii: Working with Scratch Desktop, below).

Educator Accounts function in the same way as regular accounts, but with the ability to set up accounts for groups of students and manage their projects from a central point. Scratch will need to verify your status as an Educator before granting access to these privileges. More information on Educator Accounts can be found at https://scratch.mit.edu/educators.

For those that are new to Scratch, both the Scratch website and Scratch Desktop have an extensive selection of tutorials that show new users the basics and take them through their first projects. To access these, simply select the Tutorials menu in the top left corner of the screen within the Code Editor. 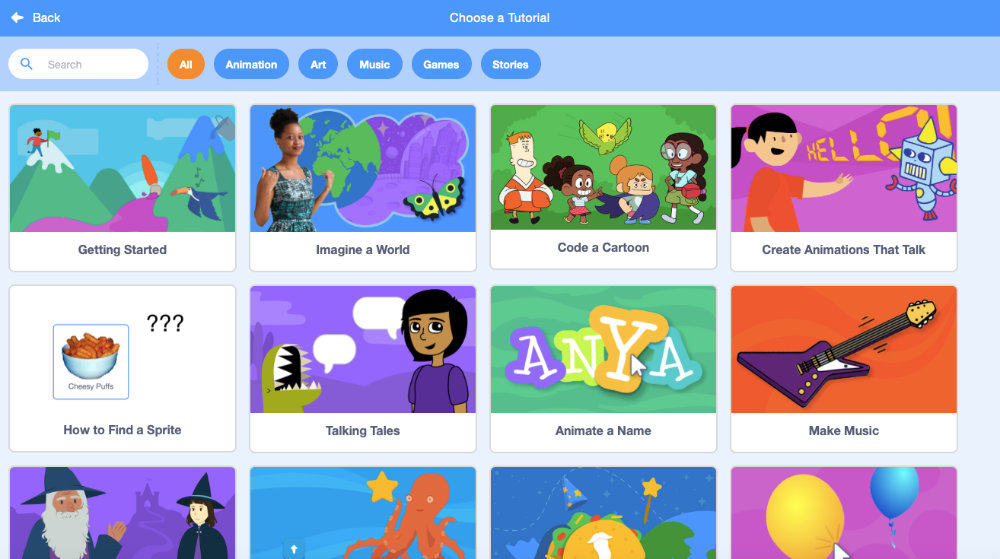 NOTE: While the end products of the Tutorials are identical, whether you use the Scratch website or Scratch Desktop, some tutorials on the website also feature short videos which may be useful for some users.

For those new to Scratch and planning to use the Exquisite Specimen resource, the following tutorials are recommended:

• Getting Started – introduces the different features of the Scratch code editor, and how the Green Flag can be used to begin a program.
• Add a Sprite – shows users how to select a sprite from the Sprite Library.
• Add a Backdrop – shows users how to select a backdrop for their project, and how to use blocks from the Looks tab to program when a backdrop appears.
• Make a Chase Game – a fully-featured project, this tutorial reinforces the skills developed in previous projects, and applies them to the creation of a small game.

The Scratch Wiki is a comprehensive resource of information about the Scratch platform, collaboratively written by its community of users. The team at SEARCH recommend the following tutorials:

• Getting started with SCRATCH
• Creating your won artwork with Paint Editor

Download the Exquisite Specimen game and its Level Template for students to create their own games and projects.

If you are new to Scratch, we recommend downloading the Exquisite Specimen project file to see how a completed game project works, including a pre-existing level structure of three levels. They can start from this completed project to experiment with adding additional levels, sounds, and alternate artwork.

More experienced users can challenge themselves by using the Exquisite Specimen – Level Template project to build their own code for their levels, write their own instructional text, and use custom artwork for their sprites and backdrops.

At first, students could the Level Template:

• Replacing the placeholder sprites with new artwork (this could be based on objects explored in the Revolutionary Collection, such as a peppered moth or a kangaroo) or use the Sprite Library for inspiration
•  Changing the backdrop using the Backdrop Library, or creating their own new backdrop using the Paint Editor
•  Editing the introductory text to better suit the focus of their project
•  Editing the game’s code to change how points are awarded, and the conditions for winning the game.

Remember to regularly save your work – especially if you are working offline!

Try this if you want to work with Scratch without being constantly connected to the internet and the Scratch website.

Scratch Desktop is the most recent program that will allow users to create and edit Scratch projects without being connected to the Scratch website. It is based on the current version of Scratch (Scratch 3), and replaces Scratch 1.4 and the Scratch 2.0 Offline Editor.

• Go to https://scratch.mit.edu/download
•  Choose the version of Scratch you wish to download based on your operating system. Scratch Desktop is currently available for Windows, MacOS, ChromeOS and Android.

Note: The Android Version of Scratch will only install on tablet devices. At present, Scratch is not supported for use on Android Phones or iOS devices.